Avalon Hill is a specialized company to create strategic board games. They have also published miniature games. Betrayal at House on the Hill is one of the Halloween Board games among all other hunted board games. Bruce Glassco is the designer of the Halloween game & was first published in 2004. However, the first edition was no longer for printing. The 2nd edition was released on 5 October 2010. Avalon Hill is the manufacturer and publisher of this game. Justine Mara Andersen has worked as an illustrator.

The Great Part of this Halloween Board Game

The game starts with the entry of a haunted house. What is filled with traps, dangers, items, omens & other horror activities? The next part is a mansion, room tiles, placing the game board with different game sessions. The haunted plot expands with the nature of playing games. The game story is something like that, one player will betray the other player & they will take the side of Ghost, enemies, monsters. The remaining player will collaboratively play to defeat the betrayed players. 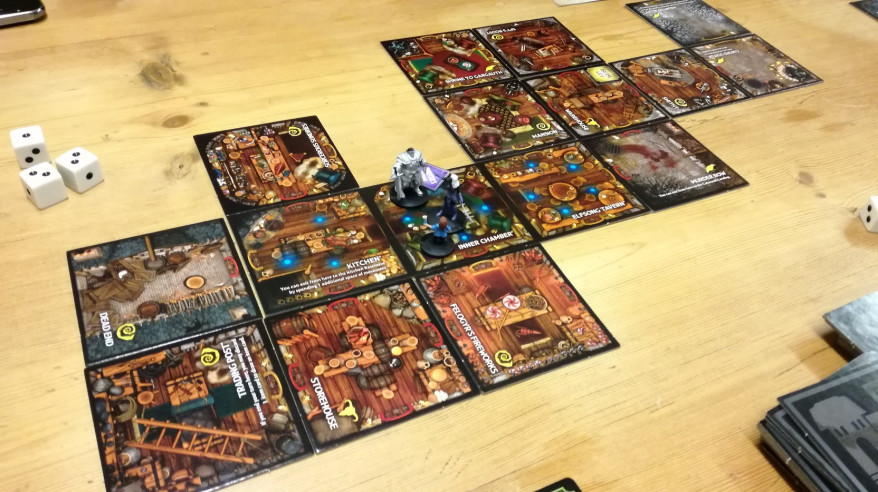 The room of this game consists of the upper floor, basement, and ground. The six different characters, with the token representing various monsters or the players. There have two possible characters in a plate character. So you can play as the same token on your board. All characters have 4 attributes to track the game’s current position, the actual value to get closed to death. Every side has 0, 1, or 2 dice to pip the game. Players need cards to avoid the damages or loss or to gain bonus points.

If you want to enjoy this game with your siblings or a group of people, you can play with three to six people. Build your own haunted house from one room to another. The more you can design your house with haunted features, the more it will be thrilling. If you die in this game, the other players can go to your room & take the items you have dropped on the floor—Betrayal Legacy 13 to 60 minutes style variant sessions and end with 50 different scenarios.

The addiction part of this game is, you will never face a similar experience twice. The person who likes to dig the old hammer horror films of William Castle can catch the thematic goodness of this game. Punch with 80 cards, Rule book, Traitors Booklet, secret survival Booklet, Game dice, more than 100 tokens & 45 room tiles are the part of creating the player’s addiction.

When playing this game, you can feel hard due to many short rules & instructions. But for the second time, it will be easy for you. Moving through the room is really very challenging for a player. The first time it might not be easy to play but not the second time. You will definitely be so much engaged with this Halloween game. As a fan of Betrayal at House on the Hill is our Halloween Board Game, I would love to recommend you try this game once. You will be a fan of the Betrayal Halloween game with the significance of investing your time.

We are modifying our realgames.com during the start of 2020 and adding more games throughout the year. They are all new Html5 games that will work in all browsers and mobile devices.
The Impossible Quiz – Most popular game
Skill Games – Our staff favorites